Possum. It's what's for dinner.

About two years ago, we decided to get rid of as much of the carpet in the house as we could. We had two cats and both were white, and the carpet was dark green. That is recipe for disaster no matter how often you shave them pink. As you can imagine, the carpet was almost impossible to keep hair-free, since for some unknown reason, our cats seem to spend more time writhing around on their backs than Lindsay Lohan.

We replaced everything we could with hardwood flooring, with the exclusion of the stairwell between the first floor and second floor. We didn't want to pull the carpet up there because we knew the stairs underneath were just "builder quality," and we figured we'd just save our money until we could afford to have someone replace them. After we had the upstairs floor finished, my wife decided to paint the stairwell, since it was pretty banged up. What happened next is this: She dropped a half gallon of antique white latex paint down the stairs. She will tell you that she did it by mistake. She was almost completely done with her paint job by the time she did this, so either she is telling me the truth or she is devious enough to think it would be more believable if she finished the job first. At any rate, this meant we had to pull up and discard the carpet on the stairs. What was underneath was pretty bad. Stringers cut with a circular saw, and what amounted to scrap wood for treads and risers. Paint and plaster all over.

Carpet covers a multitude of sins, and that's a fact.

We didn't have the money to replace the stairs, so we thought we'd get a quote on having them re-carpeted. Turns out, carpeting stairs is the thing most carpet guys hate the most, and the prices we got were between six and seven hundred bucks. I am nothing if not a cheap bastard so obviously I thought to myself "For 600 bucks, screw the carpet. I can build the new stairs myself for less than that."

I can do it myself for less.

I never seem to learn. Out of all the times those words have come out of my mouth, I would say about 75% of the time, I am wrong. But I am like a gambler in that respect -- I remember the wins and try to forget the losses. Don't get me wrong; Most of the time when the job is complete, I'm happy for having had the experience, but in the end it always seems to cost me more, if not in actual money, then in tremendous ass-pain. I decided I was going to do it anyway.

I mentioned this plan to my father, who mentioned it to a builder friend of his. His builder friend laughed heartily at my foolishness, then said that he had a set of precut stringers that he thought might work, and I could have them for free.

Free is better than not free, unless you're talking about furniture or hookers, so I took them. I made some rough measurements, and pronounced them most likely good. I sanded them, painted them, cut all the treads and risers, made about 70 wedges for keeping everything together and enlisted the help of a friend of mine who can make just about anything with wood, and make it better than I ever could. He makes fine furniture for a living and custom electric guitars for fun. And his boss had done stairs before and shared some tips with him. He bought a book on building stairs before coming over. That's the kind of guy he is.

On Saturday, we ripped out the old stairs. Being a meticulous and cautious sort, my friend suggested we try to get the old stairs removed without completely destroying them, since we weren't 100% sure the new stringers would work. All in all, we only had to saw through about half the treads to get them out.

When we had a giant hole where the stairs were supposed to be, we brought in one of the new stringers to figure out the length. Rise and run calculations are not fun, I can tell you that much.

We made cardboard templates, we enlisted non-euclidean geometry and I am pretty sure we came unknowingly close to summoning the Old Ones. After all was said and done, it turns out that the rise and run on the new stringers was just a tiny bit different than the old ones (the old steps, not the Old Ones), by about 1/16" per step. Which meant either the top step would be a couple inches longer and lower than it should have been, or each step would be at a slight downward angle. Neither of these solutions was optimal, unless my goal was to make it really easy for someone to break their ass on the stairs. So as a result of this, we had to put the old ones back in, 1/3 of which were cut into pieces. No fun at all.

So until I can get some new stringers cut and try again NEXT weekend, we have Cletus stairs, fit for a Louisiana Bayou shack: 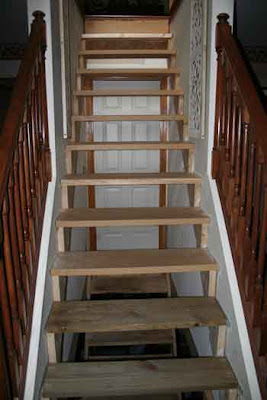 On the plus side, it sure does help circulate the musty basement smell throughout the living room, and that's something we've been trying to accomplish for a while.

If the stairs don't work out next weekend, I think I'm just going to install a net. Then we can scamper up and down it like a couple of spider monkeys.
By Johnny Virgil at 12:57 PM