A few weeks ago, my wife and I were wandering around an outside strip mall and she wanted to treat me to dinner. We decided to go to this place called Provence because she had been there quite a few times for lunch and said it was really good and reasonably priced. That's lunch. Dinner wasn't so "reasonably priced," but that's not the story here. Our waiter's name was Steve, and he was excellent. I saw him "arrange" our bread on his way out of the kitchen though, and I don't like people touching my food. The meals were good, but way too elaborate for my unsophisticated palate. This story has more to do with their fancy bathroom than their fancy meals.

I've posted once before about becoming a stall man, and the reasons why. Or, rather the reason why, and that reason is because I don't like standing in sticky, half dried floor-pee. So I thought this was the greatest thing ever: 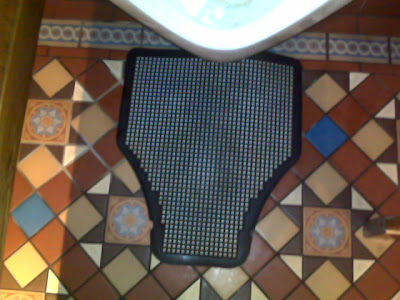 Yes. It is a pee pad. Because I am not really used to going to upscale restaurants, this is the first time I had ever seen one of these. Normally, the types of establishments that I frequent make you pay for your meal before you actually eat it, and if the bathroom has any sort of pee pad it's entirely coincidental and consists mainly of a pile of soggy paper towels and someone's vomit-stained sweatshirt.

At first, I wondered to whom the cleaning duties fell, because that seemed like something I would like to see my worst enemy do, if I had a worst enemy. I figured there was a sign next to the time clock that said:

IT HAS COME TO OUR ATTENTION THAT SOME OF YOU ARE PUNCHING IN LATE. FROM NOW ON, IF YOU PUNCH IN LATE TWO SHIFTS IN A ROW, REMEDIAL ACTION WILL BE TAKEN. IN ADDITION TO YOUR REGULAR DUTIES, YOU WILL ALSO CLEAN THE PEE-PADS IN THE MEN'S ROOM FOR THE NEXT 3 MONTHS, OR UNTIL ONE OF YOUR CO-WORKERS PUNCHES IN LATE TWICE IN A ROW. WE ARE SORRY IT HAS COME TO THIS, BUT IT'S NOT FAIR THAT STEVE HAS TO CLEAN THE PEE-PADS ALL THE TIME.

Then, because I don't want to mislead you all, I did some research. It turns out that they are disposable and contain "inner super absorbent Trilex 20™ fibers to catch drips and splashes." I don't know what that is, but it sounds very scientifically valid. Supposedly, "Once the mat reaches its saturation level, you simply throw it away and replace with another."

I am not sure I want to know exactly how "saturation level" is determined. I can only hope there is an alarm of some sort that warns someone that saturation level is fast approaching -- preferably someone who knows how to deal with such things.

Otherwise, your single, errant pee drip could be the one that breaks the camel's back and releases a urinary flood of epic proportions.

I know I wouldn't want that on my conscience. Or my shoes.
By Johnny Virgil at 5:24 PM