I usually don't pay much attention to the ads over there on the right that Google AdSense pukes up every time you refresh this page, but for some reason I decided to click on one the other day. A few clicks later, and this was on my screen: 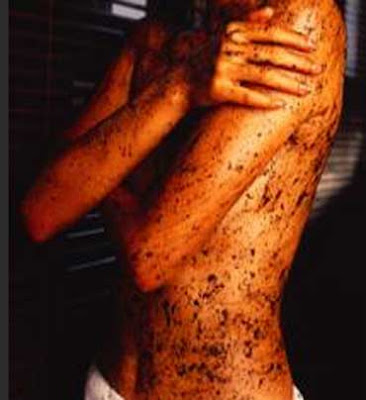 Had I wandered into some perverted fetishist web site? Was I looking at the blow back from a particularly grisly Tarantino shotgun scene?

No, although either of those things would have made more sense.

In fact, I had wandered into a place that sells creams and oils and bubble baths and scented paraphernalia of every kind, all designed to make you better than you were before. Better. Stronger. Faster. We have the techn-- No, wait. I'm thinking of something else.

That picture up there is actually a woman who has (presumably voluntarily) slathered coffee grounds all over herself. While not technically identical to what comes out of a can of Maxwell House, it does appear to share much of its overall texture. They've apparently created a "special formula" by adding shea nut oil, olive oil, grapeseed oil and something called Babassu,* all in an effort to differentiate this from the "special formula" under your sink that has the eggshells and soggy cheerios mixed in it.

"Coffee Scrubs are quickly becoming the prized product of the beauty industry. They are an excellent source of caffeine that pampers the skin -- by awakening dead skin cells. The bonus is that Coffee is also an excellent exfoliant and a great anti-cellulite treatment. We have infused our Coffee Scrub with wonderful oils of Shea Nut, Olive, Grapeseed and Babassu. Each of these oils work in harmony to realign stagnant skin cells and speed nourishment to all areas of the body. If you crave a superior scrub -- that your body will devour -- our coffee scrubs are a perky jolt of body luxury!"

Let's take a look at these claims.

Claim number one: They claim their body scrub is an excellent source of caffeine. I will give them that much, since I believe caffeine can be absorbed through the skin pretty easily. That being said, I think you'd probably absorb more caffeine from the inside than the outside. Given that fact, it just seems easier to drink a big mug of coffee to get my daily caffeine fix rather than dealing with errant coffee grounds packed into my asscrack all day. Maybe that's just me, I don't know.

Also, according to claim number one, this product awakens dead skin cells. I am pretty sure I would not enjoy having all my dead skin cells suddenly awakened. I, for one, do not want zombie skin. What if they start attacking the living skin cells in order to eat their mitochondria? I could have a microscopic version of Night of the Living Dead happening right on my own self.

Normally, I think that would be a strike-out, but since I know nothing about baseball, I am going to continue.

Claim number three: They say the added oils "work in harmony to realign stagnant skin cells." This confuses me. Number one, if my skin cells are stagnant, wouldn't I want them gone? Stagnant sounds bad, and has smelly connotations. Also, how am I to know they are truly out of alignment? I mean, they feel ok. I'm worried that maybe they are perfectly aligned but still could be in a stagnant state. Is this stuff going to screw up my alignment, or does it somehow differentiate between the various stagnant cells and only go after the ones that are getting out of line? Are stagnant cells that are in alignment a good thing or a bad one? I don't know.

Confusing, and grosses me out a little: Strike Four.

That's what I get for looking at my own ads. I should know better. You guys present me with a problem, however. On the one hand, I want you to look at them because I get a penny or something. On the other hand, I would like to save you all from rubbing garbage on yourselves. It's a quandary.

This same company sells something they call "Bath Fudge" that looks like this: 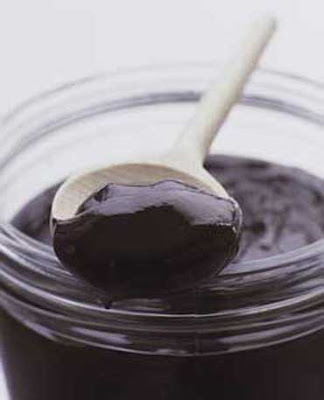 You're all on your own with that one. Good luck.

Vote if ya feel like it. There's some new whippersnapper gettin' all up in my bidniss.


*which looks a lot like a phonetic representation of how they pronounce the name "Bobby Sue" down south.
By Johnny Virgil at 12:53 PM