I have a bad habit of turning the passenger-side of my car into a dumpster. It drives my wife nuts. But since I rarely if ever have passengers, it just sort of happens over time, especially in the winter when I don't have a chance to clean my car. For instance, I've had the Miata's license plates sitting on the floor since I took the car off the road in October. I never actually made it to the DMV to turn them in because I'm a lazy piece.
Sunday morning I stopped over to Paul's house to help his wife figure out what to do with some of his camping gear, and ended up taking a few things. They also ended on the floor in my car. I had some tools in the back that I wanted to remember to take into the house, so I put those there too. Of course, that didn't happen, and so everything sat there.
The next day was monday and as a result I sucked it up and went to work, since that's the kind of guy I am. I figure it's bad form to call in sick on a monday. Unless you're actually sick, I mean. Since I get there very early, I parked where I usually park, which is right in front of the building because, well, lazy piece.
As I grabbed my coffee and my laptop, I happened to look over at the floor of the passenger side and saw this: 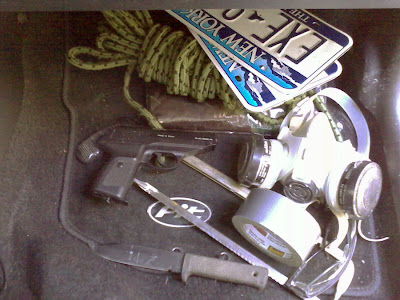 Jesus. I think the only thing missing was a bottle of chloroform and a rag.
After work I drove home very carefully, going the exact speed limit the entire way.
Then I cleaned my car.
By Johnny Virgil at 5:37 PM