Mexico: Part III - Mr. Virgil? This is your wakeup call.

Now that everyone is stuffed on Easter candy, it's time to continue on with our Mexican adventure.
As I said in my last post, we had decided to sleep in for a bit on our second day. We learned a lot on this trip. For instance, here's something I learned -- there will be no "sleeping in."
You know what they have in the jungle? Jungle birds. And these birds get up a LOT earlier than you do. I think when birds from other places are applying for jobs in Mexico, the classified ad looks kind of like this: 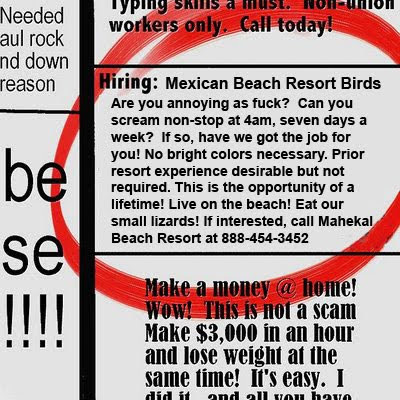 There was a dove-looking bird that sounded like a hoot owl. WHOO WHOO WHOO Whoooooooooo! WHOO WHOO WHOO Whoooooooooo! over and over until you wanted to cut a hole into your mattress and crawl inside. The other bird call that was especially pleasing to the ear was the one that sounded exactly like this. Unfortunately, it didn't include the explosion at the end. After about the second day, I started making the explosion sound under my breath every time I heard one - until my wife asked me what the hell I was doing. Then I just did it in my head instead of out loud. [edit: listen to the actual bird call here.]
Here's another thing we learned -- in Mexico, (at the beach resorts at least) you can't flush the toilet paper. Seriously. Instead of flushing it, you simply drop your butt-wipings into the wastepaper basket next to the toilet and the housekeeper picks it up the next day. It's a good thing that the bathroom had a door and a window, because a pail of crap isn't really conducive to indoor air quality. Luckily for both of us, Montezuma's Revenge didn't enter into the picture or things could have become interesting -- and not in a good way.
I found this a little bit revolting to be honest, and I felt bad for our housekeeper. I mean, she probably doesn't make much to begin with, and now she has to empty baskets of feces-laden paper on top of that? (I felt it was only fair for me to tip the crap out of her. So to speak.)
Our last lesson for the day occurred when we got to the beach. We learned that Playa Del Carmen beaches are a little more "European" than we knew.
We saw some things. Some things that should not be seen. Ever, by anyone, anywhere. Human breasts should not look like that. It's not normal. My first thought was, "Why does that old guy in the yellow bikini bottom have two giant brown leather satchels sitting on either side of him?" My second thought was, "Heyyyyy, leather satchels aren't supposed to have nipples." It was eye-opening, to say the least. You tried not to look, but every time she moved it was a brand-new train wreck. It reminded me of this picture. She clearly didn't give a shit what people thought, and I can certainly admire that.
We spent most of the day there, but I didn't go swimming. The wind caused the water to be quite rough and the red flags were out, which generally means you might get sucked out to sea and end up off the coast of Brazil or something. Both the water and the beach were beautiful, however, and the place wasn't very crowded because of the wind. Or maybe it was because nobody wanted to look at satchel tits. I'm not really sure, but there was no shortage of available beach chairs.
On the way back from the beach, my wife made friends with a stray kitten that was hanging around by the bar near the pool. He was all black with green eyes, and maybe 3 or 4 months old. The bar featured rope swings and as luck would have it, that's where we happened to be sitting. The kitten really seemed to like my wife. He was probably chock-full of diseases but he seemed pretty healthy overall. My wife was petting him and commenting on how cute he was and before the last word left her mouth, he squatted down and took a big dump in the sand right near her left foot. He nonchalantly covered it up and sauntered away. "Awww, he's so cute," I said.
But really when you think about it, if you're a cat, what better place could you live? It's like having 300 miles of clean litter box. You've also got great weather all the time, plenty of shelter, lots of birds, (too many frigging birds) and people feeding you scraps all the time. Pretty sweet deal. By the end of the week, we had this going on: 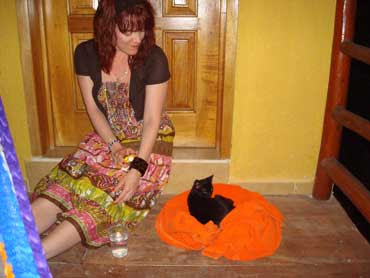 Don't ask. Cats just like her for some reason.
The next day we went on a tour of the ruins at Tulum, and my wife almost got ravaged by some local wildlife. More to come.
Continue to Part 4
By Johnny Virgil at 7:28 PM