My pits can beat you at chess.

I noticed something that struck me funny while I was getting ready for work the other day. The top of my deodorant says this: 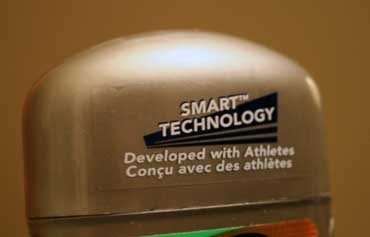 First of all, I'm not exactly sure how my no-stink stick can be smart. From what I can tell, it really has very little in the way of intelligence. It can't even automatically roll itself up a little bit when I am scraping armpit skin off on its hard plastic sides. Also, how do you trademark the word "smart?"

The bigger problem, of course, is that if some scientists set off to develop "smart technology" I would think one of the last groups of people they would go to would be athletes. Granted, they're probably better off going to athletes instead of...oh, I don't know....rappers or David Lee Roth, maybe. But still -- As a whole, athletes are not generally known for their scientific prowess.

How would that development actually happen? I can picture it now.

Scientist: I've developed what I think may be the ultimate Smart{tm} deodorant! However, I am not sure if it really works, so I need your odoriferous expertise. Rub this under your armpits.

Scientist (pointing): No, no. Those aren't your armpits. There you go. And now, we wait. Um, maybe you better take a few laps.

PFBP, upon completing laps: Does I stink?

PFBP (holding scientist by neck): Where's my money at?

I compared it to my other, non-smart deodorant, and there really doesn't seem to be much difference.

I think that one might be more crafty than smart.