Please god, not the hole in one.

Being from New York, I had never heard of this game. I guess it's big in Scranton because people were incredibly good at it. They brought their own homemade cornhole boards, that's how hardcore they are. What is cornholing, you ask? Well, it's when one inmate commits to a verbal 'contract' with another inmate whereupon he is provided 'protection' in exchange for...no wait -- that's the wrong one.

Much to my relief, it was fairly innocuous and not at all painful, unless you count the acute pain I felt for the lost dignity of those people actually playing. In this instance, cornholing is the act of throwing a bean bag, (or if you are playing with a bunch of professionals, an actual corn bag) at a slanted piece of wood with a hole in it.

There are all sorts of complicated and arcane rules that I really didn't pay attention to because I wasn't playing. From what I gather, it's similar to Jarts except there's no drunkenly launched steel-pointed projectiles flying through the air. With no chance of witnessing an inadvertent impaling, I lost interest pretty quickly.

I was, however, extremely relieved to find out that (1) You weren't forced to play, and (2) It was nothing like I expected.

To give you a sense of my relief, I drew it in picture form: 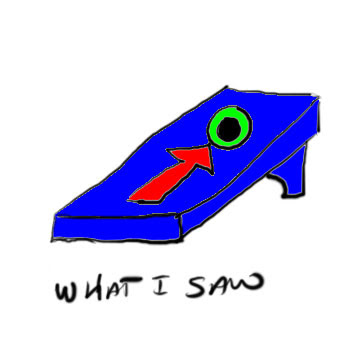 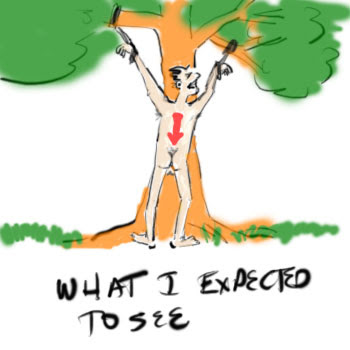 I have to say the high point for me was this conversation with my boss:

Me: The boards your husband made keep collapsing.

Her: Why? What's wrong with them?

Me: I don't know. I think it's cuz all these guys are professionals and they're just pounding the crap out of your cornhole.

Her: That is just so wrong in so many different ways.

The golfing was a lot of fun. We played a scramble, and I did better than I thought I was going to, since I haven't picked up a golf club in about 10 years. I quit when it became really popular because I was wasting too much time and money on it, and I couldn't stand the way our local public course was turning into a country club. I think I may have to give it another try though.

Special Dark was on my team, which really made the whole thing worthwhile. Even if I never got to swing a club, it would have been worth the 18 bucks just to see him shank three shots in a row straight into the woods and then completely lose his shit and heave his golf club into the next fairway. The other guy on our team had never been golfing before, and a lot of the time it was like watching a cartoon. He'd wind up, swing as hard as he could, completely miss the ball, and then spin around so hard he'd practically screw himself into the ground.

All it needed was manic piano music.