Two things I do not anticipate ever needing.

I was at the drugstore yesterday trying to find a deodorant that doesn't smell like something my dad would use. The problem is that I am out of the stuff I normally use (Polo Sport), and you can't buy it at any drugstore around here. Because I'm a sucker, it's ridiculously expensive and I have to go to a store like Macy's to get it. I have been using some sort of shitty smelling Mennen Speed Stick called "Ocean Surf" which smells less like the ocean and more like some kind of automobile air freshener. It was supposed to be a stand-in until I could get more of my normal stuff, but I couldn't stand to smell it one more day. So anyway, that's how I ended up cruising the aisles at CVS. I bought something made by Adidas, and it smells OK-not-great. Servicable. Only slightly whorish.

After I bought it, I was thinking about the whole idea of Adidas making pit sticks. That's pretty diverse, since I only remember Adidas from their sneakers and warm up suits.

So now that you are intimately familiar with the olfactory nuances of my armpits, I will get to the meat of this post. While I was perusing the aisle of the stuff of man-whores and picking up some more shampoo, I saw a couple of hair care products for men that I (with luck) will never use. The first is not so much a hair care product as it is a lack of hair care product. Check this out: 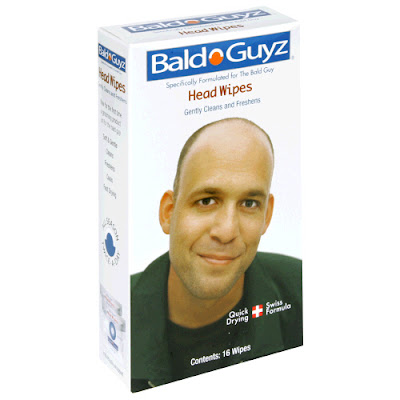 Yikes. Head Wipes. They are kind of like those little moist towelettes you use after you eat chicken wings, except they are more expensive and a little bigger. They claim to gently clean and freshen your head. The gentle part is good, because really, who wants to brutally clean and freshen their head? Not me, I can tell you that.

I have to confess that I didn't realize that bald heads can sometimes have that not-so-fresh feeling. Also, I just sort of figured that a shiny head was normal, and maybe even desirable in the bald circles, since that's normally what I see. Perhaps someone should step up and simply claim it to be so. Then you wouldn't need to chicken-wipe your head three times a day -- you could just Turtlewax that bad boy once in the morning and be done with it. And can someone please get Foreigner out of my brain? Thank you.

The other hair treatment I saw was this: 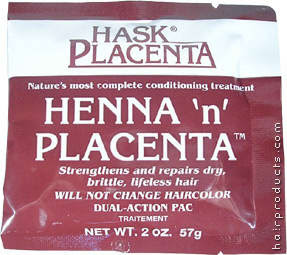 Now, as I've said. I am not bald -- I have hair. Some might say a lot of it. Too much, even. So I am a prime candidate for this product. I am this company's target market. That being said, there is no fucking way I am putting this stuff in my hair.

The Henna part, OK -- there's some wiggle room there. The 'n' placenta part is where I draw the line. I don't care if this shit is like stem cell rejuvenation for my scalp and smells like fresh strawberries and cream, I am not rubbing placenta on my body. Anywhere.

Why do they have to call it what it is? Doesn't this company have a marketing department? If they do, I'm betting it's still in the embryonic stages.* They may as well have called it Henna 'n' Afterbirth for god's sake.

This product has to win the worst marketing of the year award for, hell...for ever. All I'm saying here is that they need to change this name if they are serious about wanting to sell it to normal and fine people who do not paint their fingernails black and worship satan. They could maybe stick with the afterbirth naming convention, but call it HENNA/AB. Make it sound scientific instead of disgusting. I mean, even the guys over at Purina know you don't call your brand of dog food "bull penis and chicken guts" if you want to move units. You call it something like "Beef 'n' Chix.*"

*I think I rented that video once in college.
*I know, and I'm sorry.
By Johnny Virgil at 4:41 PM