Last weekend I am pretty sure I experienced the absolute opposite ends of the musical spectrum, and it may have temporarily broken my music bone. On Friday, I got a call from Yort and he said his friend was playing at a place in Saratoga and asked if I wanted to go. I asked him where, and he said "Caffe Lena's." I said, "HELL YEAH!" and made the devil signs with my hands and then went and told my wife to not wait up because I was going to go out with Yort and get all folked up.
Caffe Lena, if you don't know, is an historic musical venue in Saratoga, NY. I've been there a few times, and while I'm not generally a fan of folk music, it doesn't hurt my insides as much as rap or country so sometimes I've been known to sit through a set or two when asked. This place is famous and the list of people who have played in this room is staggering, considering it's about the size of my living room and kitchen area combined, and has a low, dingy drop ceiling and no ventilation. And did I mention that they don't serve alcohol of any kind? Not even an Irish coffee to be had. This place is strictly sandwiches, pastries, coffee and tea. So you have to either really enjoy this sort of music or be there at the behest of a friend to voluntarily sit through it while stone cold sober.
The trio we were there to see is called Bread and Bones, and even though it's folk, they are really good musicians. The harmonies were spot on, and the lyrics were pretty cool from a story-telling perspective. At the very least, I could certainly appreciate the craftsmanship. At one point the ukulele came out, and the singer said, "You can't play an unhappy song on the ukulele." I leaned over to Yort and said "Hey, it's just like a wave runner!"

So the other bad thing about this place is that it's soooo small you can't really make comments or jokes because you have 15 people in the audience paying rapt attention, and if you even try to sneak a fart out in the middle of a song everyone in the room instantly knows it. So I kept further comments to myself and we cooled it on the jokes after a while and just listened to the songs because people were starting to get a little pissed off, I think.
Bread and Bones were the opener and I wanted to leave afterward but I guess that's not really good form since the four of us were about 1/3 of the audience. So we stayed through the break and caught up with Yort's friend for a bit. At that point the coffee was going right through me so I hit the bathroom. There wasn't an inch of the wall not covered by graffiti -- it was crazy. And they were really, really adamant about not peeing on the floor: 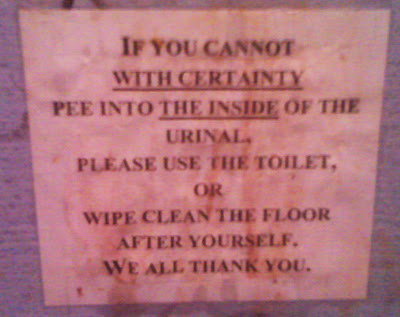 I especially appreciated the fact that, rather than just saying "DON'T PEE ON THE FLOOR" they gave you several possible alternatives, each of which were pre-approved and management sanctioned. The fact that the sign itself looked like it had been pissed on many times in its history was a standing testament to the passive-aggressive behavior that apparently runs rampant in hardcore folk circles.
Next up, we had Sally Spring. Sally and her husband are a duo, and he plays a pretty decent guitar. Not a fan of his backup singing style but Sally had a pretty good voice. Sally also played guitar and it was friggin' amazing to watch her because she is at a slight disadvantage:

As Yort said, "I'll never complain about how hard it is to play guitar with my short, stubby fingers ever again." It was kind of mesmerizing at first, but after a while you sort of got used to it. OK, no you didn't. But it was still pretty amazing and an incredible example of not letting a handicap stop you from accomplishing your dreams.
So I'm all good on the Folk music for a while. For me, it's sort of like that piece of fruitcake your great-aunt gives you when you visit her on Christmas. When you're eating it with your coffee you're thinking, "Hmm, this isn't so bad. I can choke this down to make her happy." but after about the 3rd bite you're ready to wad it into a ball and stick it to the underside of the table and hope nobody notices. Then when she gives you the leftovers, you politely thank her and throw it out of your car window on the way home.
The next night, we headed to the Palace in Albany for a concert by Dream Theater, a band that Yort is a huge fan of. I can appreciate that they're all complete masters of their respective instruments and I like some of the music but unfortunately I'm not a huge fan of the singer's voice. He's got great pipes, but he's a little too Queensryche-ish for me. My friend happens to be their tour manager so he generally gets us in for free and it's always good to catch up with him. It was a really great show, and I was glad I went because they recently got a new drummer named Mike Mangini, and I had been wanting to hear him play. He's ex-Extreme and ex-Steve Vai, and he's an incredible player. The funniest thing about this band is that they make me feel tall. On stage, they look like giants, but when you meet them in person, they're all like five six. The new drummer is about 5' 3" I think. His set is pretty crazy, and takes about two and a half hours to set up. I sent this video to Yort and after viewing it he said, "So I assume you're heating your house tonight with the remnants of your destroyed drum set?"
All great guys though. This was the first time we got to meet all the members of the band. Normally, one or two will show up for the after-show, but I think there may have been radio station involved or something because they all came down. It was the first time we had met John Myung, the bass player, and when I shook his hand it felt like I grabbed onto the root of a tree. I looked down at our hands and I immediately saw what a lifetime of playing 6-string bass for hours a day could do to you. His fingers looked like they were the transplanted toes of an albino chimpanzee. They were all bulbous on the ends and formed entirely of hard, yellow callouses, with a thick, half-inch long fingernail on each. His fingers could have punched through a steel door. The shit we do for our art, I guess. Amazing bass player even though he doesn't have human hands.
We talked to James Labrie about his performance and how good his voice sounded and he said he's been taking better care of it lately. I asked him about a technique I read about once where you can dunk the top half of your head in a sink full of warm salt water and actually breathe in through your nose a little and suck the water into your nasal cavity. It's sort of like a full metal jacket neti pot. He just looked at me strangely for a second and then Yort said, "Are you asking him if he drowns himself?" Then James said, "I have to go stand over here now," and edged away from us. Not really, but that's what it felt like. Anyway, a fantastic show as always.
This weekend I'm depressing myself doing winter-prep yard work. I don't know what the hell I'm doing -- I sat down to write about whirlyball, and this came out instead and I decided to post it anyway. What can I say. I'm a mess. I need some blue sky autumn weather. This rainy stuff is sucking the life out of me.
By Johnny Virgil at 5:07 PM