OK, I saw this Virgin Mobile commercial last night and it freaked me out. 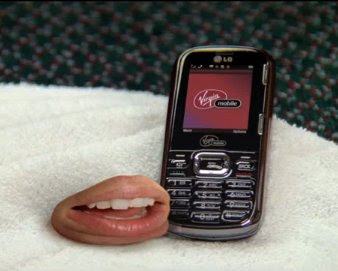 First off, I don't know about you, but if I were planning on having some sort of disgusting crotch-rot conversation with my mom, I probably wouldn't do it in public. Secondly, how does your mom know about your rot to begin with? Did she catch a whiff at brunch last Sunday and ask about it? I'm glad you're airing that thing out, and "the smell means it's healing," because the alternatives are too horrible to contemplate. If you let it get out of hand, it could result in.. oh, I don't know...maybe something like your mouth falling off your face and sitting there on a locker room bench like some kind of masochistic pocket pussy. Maybe something like that.

Jesus, that chomper is going to give me nightmares. Or sex dreams. I'll let you know which way it tips.

Has anyone seen the trailer for this new Disney DVD called "Snow Buddies?" How shitty does this movie look? Not just from a plot standpoint, but from a production standpoint, too. The CGI in the e-trade talking baby commercials is heads and shoulders above this horrible mess.

In every trailer I've seen, the dogs are basically just standing there with their lifeless, shark-like eyes fixed forward, like they are waiting for a doggie treat (since they probably are). Only their mouths are moving. Nothing else on the face moves -- no eyes, no eyebrows, no nothing. The whole effect looks like it's from 1987. Hell, knowing Disney, maybe it is. They probably outsourced the animation to India.

Speaking of lifeless and sharks, I saw this movie in my Netflix Instant queue, and the title alone made me laugh, so I'm going to watch it and write you guys a nice review: 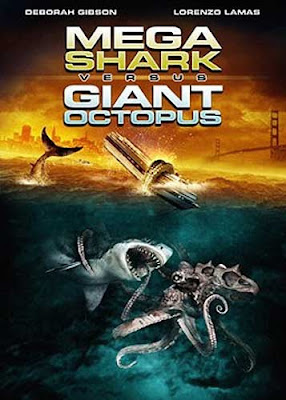 How can I not? It has both Debbie Gibson AND Lorenzo Lamas. The only way this could be any more awesome is if the Shark and Octopus turn out to be David Hasslehoff and Gary Coleman.

Of course just finding a picture of that movie led me to some other "recommendations" like this one: 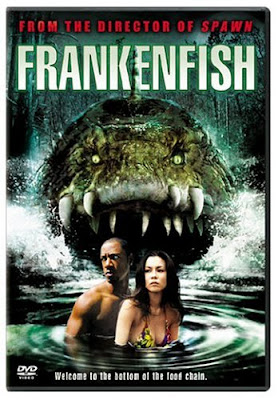 I absolutely love the look on the black dude's face. He's like, "OK, you guys set me up in a sweet beach house with a hot chick wearing a bikini. What's the catch?"

I'll let you know how these experiments in cinematic splendor turn out.

Apparently Americans are either too dumb or too lazy to figure out how a roll of tape works, and so now we have to have individual, pre-cut, dispenserized pop-up tape. There's even a video showing you all the things you can do with pop-up tape. Of course, it's all the same stuff you could do without pop-up tape, unless you only had one hand (or maybe had two but one of them was busy with the S&M virgin mobile thing.) Then pop-up tape is probably pretty cool.

Also, am I alone here in hating the Snuggie? Let me clue you in. Here's what the Snuggie is: A crappy polyester robe with no belt, that you wear backwards. That's it. Go to Target, buy a nice XXL fleece robe and wear that backwards. You'll be warmer, and you'll be the only one in your neighborhood with a plaid Snuggie, plus you won't look like a monk who escaped from Renfaire.

Even worse, now they have snuggies for dogs. And if you act now, you can get in on this BOGO deal: 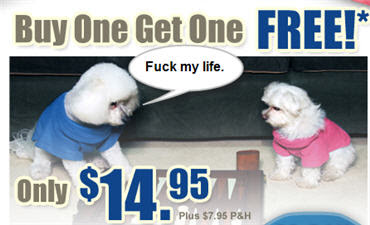 Lastly, it's become obvious to me lately that Vietnam has many problems --foremost among them, their economy. They are suffering from accelerating inflation and a widening trade deficit and a general devaluing of thier currency, which I recently learned is called the Dong. So Vietnam, I have some advice for you. The first step in fixing your economic mess is obvious: Rename that shit. I'm just saying that nobody takes you seriously when you offer to pay for dinner and then whip out a pocketful of Dong.

Tell you what -- If our economy ever recovers, I'll even take you all out for some nice Vietnamese food. Or as you call it, "food." There's probably, what? 10 or 12 of you left over there? I think we probably owe it to each other to have some grub, play some tunes and get shitfaced. What do you think?
By Johnny Virgil at 4:40 PM