This post will be multi-faceted. (I originally mistyped that as mulit-faceted, but that's an entirely different thing.) As you guys know, I have been writing this blog for quite a while, and I've been writing in general since before the internet was even a gleam in Al Gore's eye. I dug around a little and found this incredible story my mother had tucked away from when I was 7 years old (click to make bigger):

If you look closely, you'll see I made a "mestake" with my paragraph spacing, but all in all, a riveting piece of fiction, wouldn't you agree? And it was fiction too, as you can probably tell by the teacher's added note.

I also found this finely wrought winter scene among the stories: 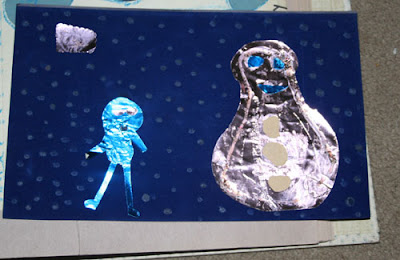 It's clear that at some point in my young life I stumbled on naked blue aliens making metallic snowmen somewhere close to my house, and subsequently repressed that memory.

Obviously, my writing is marginally better than my artwork, so with that in mind, here's a little piece of geek fiction I wrote a long time ago:


“No! This can’t be happening NOW!,” John said, his fingers flying over the keyboard. “I think the whole database is corrupted. Nick’s going to kill us.”

“What about the backups?” Terry asked. “I did a full backup of that server just last night - we should be able to restore from optical.”

“Do you know how long that will take? This stuff was supposed to be done by 4 at the latest,” John replied. “But if we have to do it, we need to.... Damn!”

“I think we just lost our server connection. Let me try to log off and log back on....Nope. I can’t connect to it. If the SQL box went, we’re toast. Maybe it’s just the NIC in my machine.” John wiped his sweaty hands on his jeans, and hit the power button on the front of the computer.

“Uh, John, I don’t think so. Look around. We lost all the other workstations too,” Terry said, as the room full of computers began popping up dialog boxes.

“Let’s try killing the rest of them before Nick calls in,” John said, as he stood up. “I’ll start in this room - you go down to the vault and bounce the server. Check the RAID controller, and make sure it’s working. If the first drive dropped dead, see if the rest have cut over. It should’ve kicked in automatically, but maybe something’s screwed up. Remember last month when we lost that unix box during the brownout? You know how the power is around this place.”

“Yeah, it stinks,” Terry said, shaking his head. “I keep telling Nick we should have a line conditioner in here, but with all the cutbacks it’s always last on his list.”

“Well, this might change his mind. Load the last set of backup cartridges while you’re down there. That way we can mess with the restore from here.”

“Will do,” Terry replied, heading off in the direction of the vault. He paused at the door. “Maybe you’d better call him.”

“No way. Not me. Not tonight,” Terry said as he walked out the door.

John finished shutting all the workstations down, sat down at his desk and picked up the phone. He dialed a number, took a deep breath and let it out slowly.

“Hello, Nick? Yeah, it’s me, John. We’ve got a potential problem down here - No, no, nothing too serious yet. We just wanted you to be aware that there was a problem...no, I don’t think it’ll screw up tonight -but we’ll keep you posted. Uh huh. Yeah, I know you can’t - that’s why we went to this system in the first place. No, I don’t think that’s necessary. I -- hello? Hello, Nick? Are you still there?” John put the phone back in its cradle, and rubbed the back of his neck. Great, he thought. The old man was coming down to the control room.

When Terry came back, John was still sitting with his head in his hands. He looked up hopefully.

Terry shook his head. “We’re in serious trouble. The whole thing is history. The main SQL box won’t even power up again. And the clustering was effed up, so even though the backup server is up and running, the data isn’t there. We’ve got a ton of restoring to do. Hey, what’s wrong with you?” Terry asked, seeing the look on John’s face.

“Tell me about it. We’ll be lucky if we don’t end up on the assembly line in the factory. Hell, we’ll be lucky if he doesn’t fire us outright.” John sat up in his chair and rubbed his temples. “Well,” he said, “let’s load up a restore and see what we can do.”

A minute or two after the restore kicked off, Nick stormed into the control room, slamming the door behind him. “What the hell’s going on here? Don’t you realize how important that data is? I thought this system was supposed to be foolproof.”

“Nick, you gotta understand, it’s about as foolproof as we can make it,” John said. “We need new equipment. This stuff is old, and we’ve been pounding on it for quite a few years.”

“We don’t have the cash, and I’ve told you that before. We never had these problems with the old paper forms system. It was slow, but at least it couldn’t crash. Now what the hell am I going to do?” Nick asked, pacing the room. “ I was counting on that data.”

“We’re restoring it now,” Terry said, avoiding eye contact with his boss. “But we’re not sure how long it’ll take. These optical disks are slow, and there’s a pile of data. The transaction logs are brutal. The database seems like it gets bigger every year.”

“Looking at the percentages, maybe four to six hours if nothing goes wrong.”

“I can’t wait that long. I have to leave in less than two, and I need that data with me.”

John stood up and took a deep breath. It wasn’t often that he was forced to go against his boss’s wishes. “Fire me if you need to sir, but I have to tell you -- it’s just not going to happen. There’s no way we can get the data off these disks in time.”

Terry piped up. “If you let us buy that SAN solution like we --”

John shot Terry a warning glance that shut him up in mid-sentence, then continued. “I think we need to look at other possibilities. Maybe you could do without the raw data this one time. Bring the sat phone with you, keep in touch. Hell, maybe we could even tether the laptop to it. We might be able to send you hourly status reports, shoot the data over as we restore it. It won’t be as easy as having the whole thing with you, but at least it’s something. What do you think?”

Nick thought it over, and his expression softened a bit. “It has been a while, hasn’t it? What the heck, I’ll give it a shot. His expression hardened again, and he glanced back and forth between them. "But I’m warning you, if this thing isn’t fixed by the time I get back, you’ll both be out of a job. And I want a formal disaster recovery plan, and I want it on my desk first thing Monday morning. And schedule a quarterly DR test. Understood?”

Terry and John nodded humbly, and set about their repairs.

Nick walked over to the phone, and dialed the hangar. “Hello? Yeah, it’s Nick. Hook up the team and bring the sleigh around to the front of the computer building. Of course I want Rudolph in front! What are you, an idiot? Right. Yes, I know it’s short notice, but I need the extra time. We’re having some computer problems.”

He hung up the phone and turned to John and Terry. “Well,” he said, grabbing his satellite phone out of his desk drawer, “it looks like we do it the old-fashioned way this year.”


Merry Christmas, everyone. Hope you all have a great holiday season! 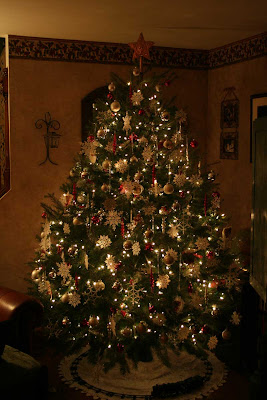