After a lot of traveling, eating and drinking, we've returned to the cave to recuperate for New Year's eve. Here's a few things I've learned since my last post:

1. The game "Catchphrase" is a lot more fun when everyone is half in the bag.

2. When one of the clues yelled out is "something you beat" a funny but entirely un-PC answer is "your girlfriend!" (real answer: Scrambled eggs)

3. Every Australian person I've ever met has been pretty cool. (Count so far: 2)

4. Australian football is "sort of like rugby, but more physical" and getting "squirrel gripped" is a real possibility.

6. If someone gets really drunk and then heads up to bed and passes out fully clothed, it's pretty funny to get 15 people to sneak up to his room, climb on the bed without waking him up, and take pictures of this event.

7. It's also pretty funny to watch a drunk chick fall backwards and try to make a snow angel when there is a 3" icy crust on the snow. 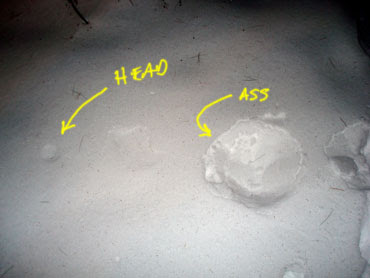 It sounded like someone hit a pumpkin with a baseball bat.
By Johnny Virgil at 6:13 PM