Ah, September.  It's the month I use up all of my vacation.  Sadly, it's over, and I only got a few trips in.  I'm hoping for a warm October so we can do a little more backpacking.  It's hunting season though, so you gotta be careful walking in the woods.  On the other hand, you could make a game of it and wear a brown suede jacket and a pair of white gloves.

To start the month off right, the weekend after labor day we headed up to Maine with our friends Vidna and Pootie.  Unfortunately, unlike our last two visits, we didn't have a full moon.  Vidna was on hardcore drugs for a series of vicious insect bites, so the girls had to take up most of the slack in the drinking department.  The one good thing about lack of a full moon meant we could get some good shots of the Milky Way like this one by Pootie.

As always, Jesus was our co-pilot.

You may remember Action Jesus, who accompanied us on our last trip to Maine. He recites the Lord's prayer (in its entirety) when you push a button just above his ass-crack.  He sounds a little like the guy who does all the movie trailer voice-overs. In a world... where pharaohs rule the day…and nobody has underwear...

He rides with us on the dashboard, and guards us against shitty weather, idiot drivers, and bad seafood.  This year, JC couldn't wait to hit the beach:


He didn't disappoint.  We had great weather during the day, and we only got a bit of rain the night before we were leaving, so I count it in the win department.   There's a very slim chance I'll burn in Hell for dressing up Jesus for the beach, but my guess is that if JC came back now,  he'd be shopping at Abercrombie and wouldn't be caught resurrected walking around commando in some rough-woven robe.

We didn't swim because the water was ridiculously cold, but we took a walk on the beach one of the days, and spent most of our time walking Marginal Way.  It's a beautiful walk with stunning natural seascapes and it's custom-made for photographs, except for one thing.  And as always, that one thing is the same thing it always is:  Idiots.  And I'm talking about a special kind of idiot.  The kind that needs to reaffirm his or her existence by tagging a building with spray paint, or carving their names into a picnic table or a desk or a tree.  The ones that need to shout to the universe "I WAS HERE!" even though the universe and the rest of us wish you weren't.  Check this out: 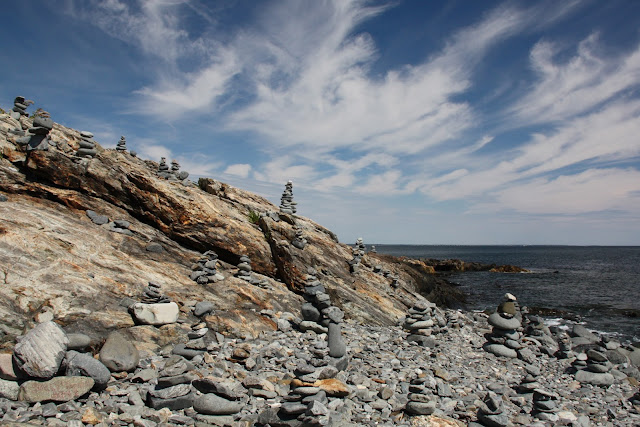 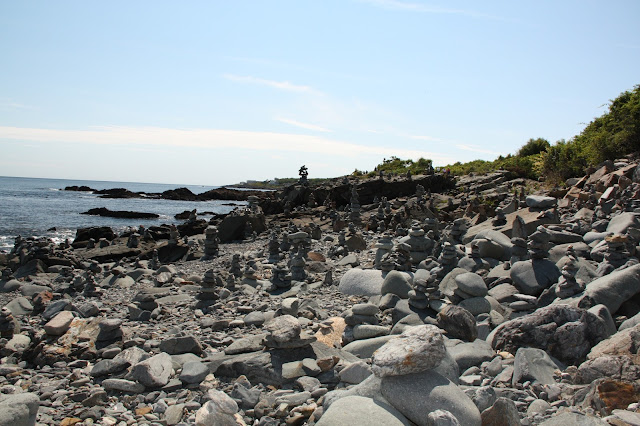 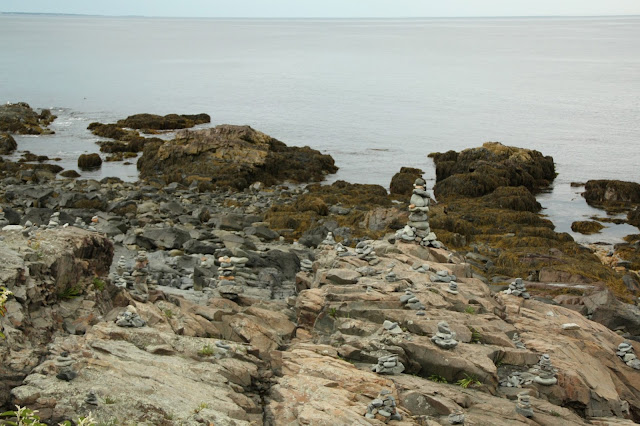 What you are looking at is hundreds and hundreds of stones stacked on top of one another.  Why? Because one idiot made the first stack and a thousand other idiots followed like lemmings.  It might as well be graffiti.  It ruins the natural landscape and it annoys the ever-living fuck out of me.  Can you tell?

When I climbed down next to them to take the pictures, I 'accidentally' knocked a few of them over on my climb back up.  Vidna is more direct.  He just walked up next to some guy who was building one and kicked over the one right next to him.

Anyway, I have no idea why humans have to do stuff like that.  Why can't we just leave shit alone?  It doesn't make sense to me.

I did take a few pictures, but when you're out with an actual photographer and his wife, and your camera is a piece of outdated junk, you don't take too many shots.  I thought these clouds were cool: 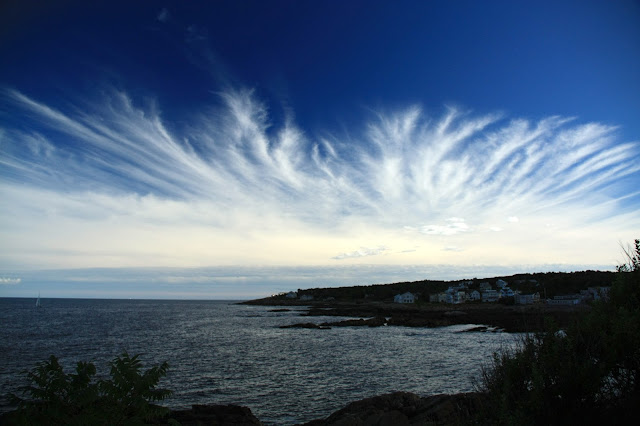 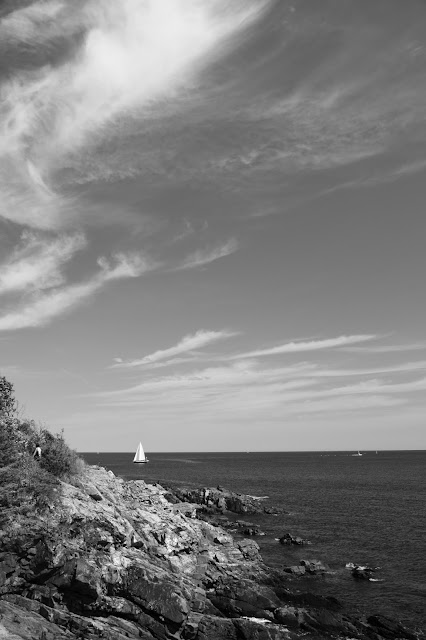 On the drive up, Vidna lets me pick the music, since I'm always riding shotgun.  I decided that the theme of the drive would be 80's music, so I "obtained" some Time-Life 80's collections and after about twenty minutes of listening to it, we realized that either 80's top-40 music was way crappier than it seemed at the time, or we were weren't listening to what was on the radio.  There were a few gems that I liked back in the day, like Scritti-Politti's Perfect Way, or Tommy Tutone's 867-5309, and of course a Rick Springfield tune or two, but a fair amount of the songs were flat-out horrible.

For every "One Thing Leads to Another" or "I don't like Mondays" there was a "Mickey" or a "Voices Carry."  The musical landscape was all over the place, so a compilation album that spans a whole decade was probably not the best choice for the drive. We had SuperFreak and the Safety Dance on the same Album and I think that must break some kind of natural law.  At least it was before auto-tune, so if you sucked, everyone knew it. It was still possible for a horrible band to have a hit though*,  so I guess it wasn't any different than today.

We had a good time, like we always do.  We ate at a steakhouse called (coincidentally, I think) The Steakhouse, and it was pretty good.  I had a hunk of filet mignon the size of a baby's head that was a little too rare for me, along with a giant salad and a baked potato and sour cream.  They had a full menu, but hey, you know, it was a steakhouse so I didn't want to go with the fish.  Not the best piece of raw beef I've ever had, but not bad.  After dinner I was so full I thought I was going to spend the rest of the night sweating meat.

The month flew by after that, mostly because it seemed like everything conspired against us getting out in the woods or on a lake.  A death in the family, the most disgusting plumbing job I've ever had the opportunity to perform, (a post that is coming very soon, once I take a break from obsessively showering to rid myself of the memory)  and some crappy weather prevented us from enjoying the month like we usually do.  We did manage to get out last weekend for a couple of days.  Here's a few pictures for your enjoyment.  I finally remembered to throw my tripod in the canoe.


This is my first full week back to work in about 30 days, and it's kicking my ass.  I've never wanted a weekend more in my life.  But by that time, I should have the disgusting plumbing story ready to tell. I don't want to remember it, let alone re-live it, but I will.  For all of you.  Because I care.

*Missing Persons, I'm talking to you. Terry Bozzio, your reputation will never recover.  I don't care if the singer was your wife at the time.  Sometimes, you gotta put your foot down.)