Fly me to the moon.

The other day I woke up at my normal and customary and totally insane time of 4:15 to get ready for my lovely commute, and as I usually do, I sat down for a second and checked my e-mail.  I saw a new e-mail from a friend of mine and the subject was simply "Good Morning."   It was just a link, but it's one I think everyone needs to see because it's very important.

See, this is why I don't travel.  OK, I've been to Mexico and the Caribbean, and granted, they have bugs there that can kill you, (Chagas, anyone? No? Malaria? No? You're good? You sure?) but this is pure grossness.


First of all,  how fast can that thing crank out eggs?   It was in this woman's ear for a split second and it had time to sit around and lay eggs?  I guess it stands to reason since it's called the "New World Army Screw Worm Fly." Not only does that sound like something that could lay a dozen eggs in a half a second with crack precision, but it also sounds like something that should be carrying a teeny tiny M-16 and a wearing a beret as it flies into battle.

Another question:  Was she drunk off her ass the whole time?  How the hell do you not know that there's something eating the inside of your head the second it starts?

I can only assume that the maggots were all crapping their little maggoty hearts out in there too, which is even worse. First you get eaten, then you get crapped on, and in a cruel twist of fate, the crap is made of you.  It's the ultimate indignity.  I gotta say, if it had been me, the second those eggs hatched and I heard something that sounded like someone eating tiny Doritos inside my head, I'd have been at my fucking ear with a screwdriver and a blowtorch.  I've had a ladybug in my ear before and even that sounded as big as a John Deere tractor inside my head while it was crawling around looking for the way out. I practically ruptured my eardrum with a turkey baster trying to get it out.

And can you believe someone with a medical diploma on their wall said, "Before we do anything else, let's fill your ear with olive oil."  Yeah, that sounds like it'll work.  Why not throw in some croutons and a little vinegar and make a salad? Jesus. And what if it actually DID work? Then you've got an ear burrow full of dead maggots, which can only cause a major case of ear odor and attract more flies. Bad decisions all around.

(As an aside, I'd like to say that I've never had maggots in my ear, but I've had them in my Milky Way bar.  I discovered it after I had eaten one of those "fun size" bars and then found 2 maggots in the wrapper.  In retrospect I thought it had tasted a little funny, but I just figured it was old.)

We have deer flies up here, and the season lasts about a month.  When the humidity is high, you can't go outside without being instantly swarmed by these little bastards, and they bite like Mike Tyson. I was told once that this particular type of fly will actually lay eggs in a deer's nostrils and the maggots will hatch and eat the deer's brain, but I have no idea if that's true or not.*

But there is a solution, and I just found out about it recently.  I was walking down the street a while ago, swatting madly at the swarm of deer flies around my head when I walked past a neighbor's house and he saw me.  He came out and asked me if I ever heard of TredNots.  I said no, and he proceeded to give me a packet of them.  Basically, they are flytraps for your head.  You slap one on the back of your baseball cap, and in no time at all, you look like this: 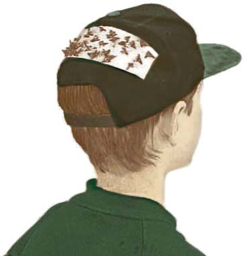 Which is disgusting, but that's not even the half of it, because what you can't see in the picture is the incessant buzzing that a dozen flies can make when their legs are stuck and their wings aren't.  Eventually everything will simmer down and their wings will get stuck too, but until that happens you feel like you're infested.  (Also: Why the hell don't movie zombies ever have flies?  You'd think that would be a given.)  Anyway, when you're doing work around the house or the farm or whatever, these things are a lifesaver.  His wife (and mine) both hate them, but they get bit and we don't so we win.

I have a couple of tips for you though -- One, don't forget you're wearing it and then go to say, Home Depot and wonder why everyone is looking at you and gagging.  Two, don't sit down in a rocking chair to relax for a few minutes and put your hands behind your head.   You will regret both these things.

I know this for a fact.

* I tried looking it up but ended up at Yahoo Answers, which should really be called Yahoo Stupid Answers by Idiots because I've never seen a valid answer there, ever.  The best answer to "Can a fly lay eggs in your nose so that maggots eat your brain?" was "Flies lay eggs in poop, and even if it did, the babies could never crawl into your brain."  So that's good to know.  I would totally let flies into my nose without fear after reading that sage advice.
By Johnny Virgil at 7:29 PM