I found out today that Yankee Candle is now selling candles for men. 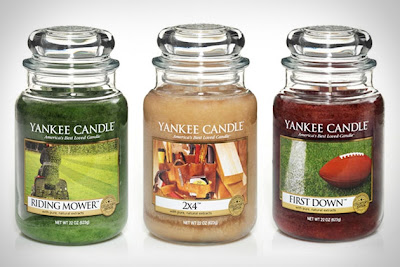 I don't even know where to begin. This is either a fantastic idea or the stupidest thing I've ever seen. I guess it depends upon how well they're implemented.

Take Riding Mower, for instance. It's clearly not just the smell of freshly-cut grass, or they would have named it "Freshly Cut Grass." No, this is Riding muthafukin' Mower, so my guess is that it has a more testosterone-y* smell to it. I'm betting this one has a top note of cut grass, however the middle note is probably gasoline and warm beer. They have to throw some realism in there, or it won't work. They can take it too far though, and that's what I'm worried about. If it were really realistic, ten minutes after you lit it, it would suddenly start smelling like you just chopped up a fresh pile of dog shit by mistake.

As a woodworker, one of my favorite smells in the entire world is the smell of freshly-planed pine boards. So I admit to you all that if this 2x4 candle smells anything like that, I'm buying a case of them. Of course, they do cost $27 each, which is not cheap for a candle. I could just go out to my shop, plane some pine boards, stuff the shavings into an old tube sock and hang it on the wall with a nail, but because I have a wife I will (probably) not do that. Not more than once, anyway.

But I'm willing to bet they screwed this up. Knowing Yankee Candle and their propensity toward making candles that smell like various baked goods, it probably smells mostly like wood, but eventually you'll notice the subtle undertone of Keebler Elf sex and underage gingerbread men.

"First Down" has a picture of a football on it, so I'm probably not qualified to judge. I haven't been forced to throw a football since high school, and every one of them smelled like a combination of dirt, wet leather and body odor. I can't imagine this scent would be appealing to anyone, but you never know.

Lastly, there's one they left out of the group shot:

I can't even imagine what this one smells like. Unwashed ass? Athlete's Foot? Moldy jock straps wrapped in a wet towel? In my experience, the whole point of lighting one of the Yankee Candles that smell like Keebler Elf sex is to to cover up anything that smells even a little like "Man Town."

Either way, I'm curious as to how these will do. In the meantime, I have another idea for them -- I call them "Complementary Scents."

So if, for instance, you cooked haddock last night and your house now smells like fish, instead of trying to get rid of it, you can just light up this candle and BAM! - you're good to go: 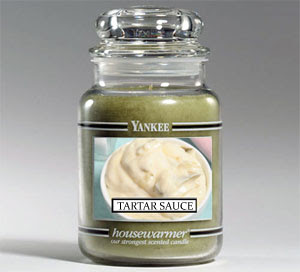 *Testosterony - the other San Francisco treat
By Johnny Virgil at 6:33 PM