Well, that's not entirely true. When the hay bale of death comes for you, there's not much you can do except roll with it.
A few weekends ago, I surprised my wife with a road trip downstate to see a concert in Woodstock, NY for our anniversary. I didn't tell her where we were going or what we were doing -- I just told her to pack a bag for a quick over-nighter. I had booked a room in a B&B not too far from the Bethel Woods venue, and had paid a crazy amount of money for this package that supposedly included seats in the 3rd row, and a beer and wine party with the band beforehand. I got this "fan package" through an outfit called ILoveAllAccess.
The first thing that went wrong was that the B&B I had reserved a room with back in May somehow double-booked the room. Since we only had it for a night, and the other people had it for two nights, they won, and we got shunted to a different place, much further away and more expensive to boot. The lady who owned the first place did offer to let us hang out there on Sunday and use their kayaks (they're on a river) and offered to let us stay free at a later date. That didn't really help us out much that night, but at least she tried to make it right.
The band was REO Speedwagon. Yes, Illinois rock is alive and well, although perhaps a bit more wrinkly and arthritic.
The reason for this particular band and show? Our first date, way back when we were kids, was to an REO Speedwagon concert, and I thought it would be fun.
Before the show, we waited with a few other couples for the ILAA representative. Her name was Cory, and she escorted us to the a little pavilion outside the "administrative wing" of the Bethel Woods Center. They had some tables and chairs set up, a barrel full of beer and wine, and a few platters of sandwiches and chips. She did a few raffle giveaways of band merch, and gave us our "goodie bags" which were supposed to contain a concert T-shirt, and some other memorabilia.
It did, in fact, include a shirt, however it wasn't an actual shirt the band sold at their merch booth. Instead, it was this godawful red-sleeved baseball jersey that had some stupid ILAA logo on it, along with the band logo. I haven't worn concert T's as a general wardrobe item since I got married and my wife showed me the error of my ways, but I'm pretty sure if I offered this shirt to a homeless guy, he'd ask me if I had anything else. The other things were a keychain, and a concert logo fridge magnet that wasn't magnetized enough to support its own weight. Quality merchandise, in other words.
Next up, she explained to us how we were going to "meet the band." That's in quotes for a reason. She said it was going to be what was called a "managed experience." There was to be no hand-shaking. There was to be no autograph signing. There was to be no unauthorized pictures and definitely no hanging out and shooting the shit with various band members. I prefer to think this had less to do with the band's wishes, and more to do with the venue and ILAA not wanting to get sued into a smoking hole if some psycho went apeshit and started stomping on these frail old guys and yelling about how they sold out in '81 and how Gary Richrath got screwed.
What happened instead was this -- the band came out, and lined up against a wall. Each group of folks who had mortgaged their house for this "experience" would walk up to the band, say "Hi," stand with them for an official picture taken by an ILAA representative, and then go sit back down. Total time invested per group of people: 15 seconds. They could have accomplished the same thing with a few cardboard cut-outs of the band.
This was the first time I had done something like this, and it's probably going to be the last, although from talking to a few of the other people there who have done this before, this was not typical. These were the people carrying all the paraphernalia they were hoping to get the band to sign, so I assume they had to know what they were talking about.
In fact, a long time ago in a galaxy far, far away when these guys were at the height of their popularity, we got to meet them backstage after a show, and it was a much more laid back atmosphere. The band was just sort of milling around, and I remember leaning against the wall talking to Neal Doughty (the keyboard player) for 20 minutes about the new synths he was using on stage. There was nothing "managed" about the experience, and it was fun. They were a bunch of really friendly guys, and I distinctly remember a few handshakes, too. Maybe their phalanges* are more brittle now.
The show itself was actually great. The opener was some fetus named Tyler Bryant. He and his band were actually pretty decent -- sort of a roots rock/pop thing. Good players.
REO was next on the bill. They've had the same lineup since 1990, and they still looked like they love playing live. They played the shit out of their hits, and seemed to know that's what people were there to see them do.
The energy was there too, and Kevin Cronin ran around on the stage like a 25-year-old. God bless him. He looks like animated beef jerky, but he still puts on a hell of a show. I took this shot from our seat: 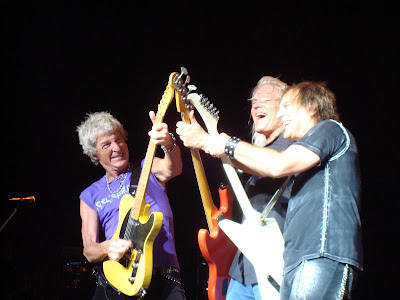 Pat Benetar closed the show, and she sounded and looked good -- but I didn't like her music even when it was popular, so we only stuck around for a few songs and then hit the road back to the B&B.
All in all, probably not worth the money I spent to make it happen, but it was a fun trip down memory lane. Also, I got to see this dude romantically slow-dancing with himself, so that has to be worth something: 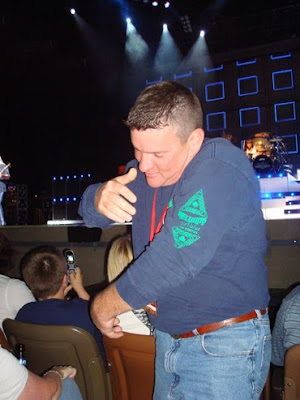 For your viewing pleasure (and to introduce the band to all the 20-somethings out there who never heard of REO and think Robert Plant is just some old dude who sings folk songs with Alison Krauss) --
Then:

And now, 30-odd years later:
It was good to see them play, and I'm kinda glad they're still around in one form or another. I find that I've reached an age where more and more of my childhood heroes are starting to take dirt naps.
On the way out, we did swing by the original B&B to get my deposit back and check it out, and ended up hanging out with the owner and a few guests for most of the morning. She's a really nice woman, and she has a beautiful hunk of property right on the river. Also, it's in some sort of eagle sanctuary, so we got to see an eagle devour a fish right across the water from where we were sitting.
Here's a shot I grabbed right after he finished eating: 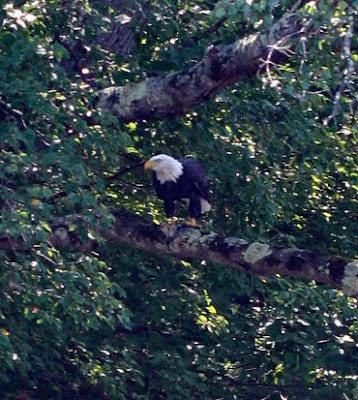 I can tell you one thing -- eagles are a lot less regal when you watch them take a dump the size of a cocker spaniel. Hope everyone had a great Labor Day weekend. I'm going to try to hit the woods a little bit this month, so I'll have some new adventures to talk about. Have fun!
Also, if you haven't seen it, this is the greatest thing ever.
*I think a good drinking game would be to watch the show Bones, and slam a shot whenever they say this word, or watch the show House and use the word Sarcoidosis.
By Johnny Virgil at 10:52 AM