I'm off pizza for a while.

Has anyone else seen this very disturbing commercial for Tabasco sauce? If there are two things I hate, it's creepy pepperoni slices that look infected, and barbershop quartets. You know what's worse than either one of those things? 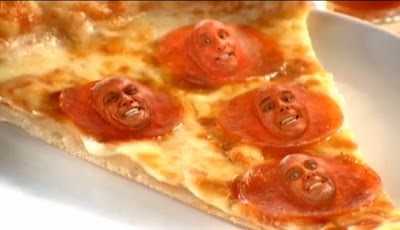 This commercial not only made me swear off pepperoni indefinitely, it also made me re-swear my original swear-off of all barbershop quartets, which, as it turns out, was a very good decision back when I made it the first time. I mean, really -- has barbershop music ever sold anything?

The other thing that immediately jumped into my mind when I saw this commercial was that these four guys auditioned for this. Somewhere, some time, an ad agency or a video production company held open auditions and these guys were the best lip-synching pizza boils out there. There were probably 30 other guys who couldn't get this part. That just makes me sad. It also makes me glad I have my job.

Even at first glance you can tell they are clearly insane pizza boils, what with their bulging eyes and gigantic, soul-devouring grins -- and I am 99% sure that one down on the tip of the slice is actually doing something dirty underneath his cheese:

I can picture the director during the shoot:

"Number four! Look more savory! Number two, for the love of god, you're lip syncing like Ashley Simpson! Three! Good job, good job. Sell it! BELIEVE that you're singing pepperoni brought to the surface of the pizza by the Tabasco sauce. Own the role! Own it! Great job! Number one! Give us your O-face! YES! That's it! That's it!"

Here's the video, if you haven't seen it.

Sleep well. And just a word of advice -- stick to the mushrooms. Tabasco has no adverse effect on them as far as I can tell.
By Johnny Virgil at 8:59 PM