hey, hand me that jesus light, will ya?

We have a lot of power failures where I live. I'm not sure if it's due to a crappy infrastructure, or just the fact that there's a lot of trees up here to fall on the wires. Regardless, it seems that we have more than our normal share. I bought 2 five-gallon gas cans and filled them up on the way home -they'll feed the generator for a while. While I was running this errand, I passed this sign: 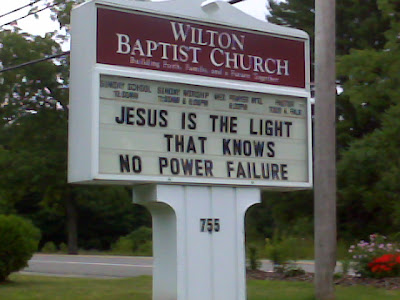 Now, I'm not sure if you are at all familiar with the light of jesus. If not, let me explain a few thing about it. Allow me to...enlighten you, if you will.

The main thing to remember about jesus light is that it's not like regular light. And by that I mean it most definitely is not energy in the form of electric and magnetic fields that vibrate at right angles to the direction of movement of the wave, and at right angles to each other. You will still need the candles or the generator during a power failure, because similar to jesus himself, you also cannot actually see his light.

Personally, I imagine it's sorta like UV, except it doesn't make your Hendrix poster glow.* In other words, when I'm banging the shit out of my shins on the coffee table and walking nose-first into the edge of half-open doors, the jesus light really won't do squat to help me not do these things.

Other things you cannot do by jesus light:

(1) Read.
(2) Wire up a surround sound system in an entertainment center.
(3) See if the Office Space dvd fell behind the TV.
(4) Scare off bears when you are camping.
(5) Hold it under your chin and tell ghost stories.
(6) Signal your extraction team from behind enemy lines.
(7) jack-light deer.
(8) jack-light trespassers.
(9) B&E

Of course, just because I have not personally seen the light of the j-man, that doesn't mean it can't or doesn't exist.

I suppose it's possible that if jesus were to appear, he could conceivably have visible light-emitting qualities. A holy glow, if you will. And if jesus IS the light, as the sign says, then my guess is that he would probably have some sort of god-like control over the level of his brightness. In fact, I'm willing to bet that he'd be infinitely variable by body part and he wouldn't have any of that crappy "low-medium-high" three-way bulb stuff going on, because that's not how he rolls.

I guess what I'm saying here is that if he (1) exists and (2) manifests himself unto me, he could totally help me hook up my surround sound.

Then later on we could go jack-light some deer.


*I'm not saying that jesus couldn't make your poster glow, because of course he could, being all powerful and what not. But he probably would have to do it on purpose, instead of as an unconscious by-product of his holy light.
By Johnny Virgil at 6:08 PM