I was thumbing through a mail order catalog the other day, marveling at the sheer magnitude of crap that is available for purchase, when I see this: 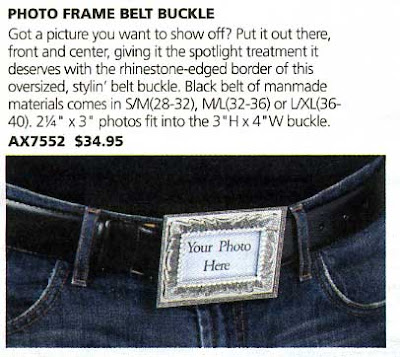 Now, you may call me a pervert or degenerate or whatever other insulting but accurate term you feel like using, but with copy that reads "put it out there, front and center, giving it the spotlight treatment it deserves" -- the first snapshot that occurs to me is not a picture of my truck or my house.

In fact, am willing to bet my next paycheck that nobody is going to buy this and think to themselves, "You know what? I think I'll put a picture of my kids in this thing." You'd end up arrested before you knew what hit you, especially if you happened to have young daughters.

I can almost see some redneck dropping in a picture of his sweet '73 Camaro or something, but that's about it. I don't think gay guys would actually wear something like this, since belt buckle fashion is not their forte and is usually left to the NASCAR crowd, but that's the only other market I could envision for this thing. They could just put an actual photo of their junk in there and save themselves some time at the bar. I don't know a lot about gay culture other than what I read, so I could be wrong.

Anyway, because it's what I do, I got to pondering.

In my opinion, it might be more effective to just stick with the written word. You know how it's almost impossible to not read a T-shirt someone is wearing? The same thing applies here. I came up with a few other possibilities. 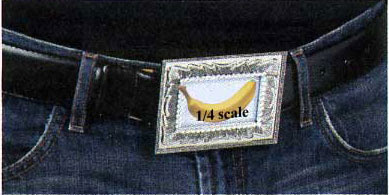 For the safe sex advocate: 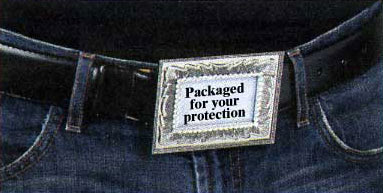 For the gay man looking for a serious relationship: 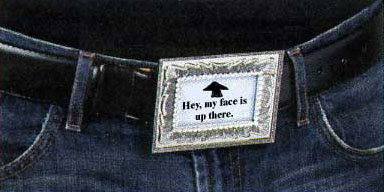 Anyway, I obviously have one on order. I think I'm just going to keep it "as is" and see what sort of comments I get.
By Johnny Virgil at 11:07 PM