Blood from a stone.

We had a blood drive at work the other day, and so I like to get out of work for a little while do my good deed for the month and donate.  The last time they came around, I had a bit of a cold so I had to skip it, but this time I was in pretty good shape.

They're always after me because of my type O blood.  I get phone calls, and follow-ups, and reminder e-mails about how many lives I'm going to save…sometimes it's more of a guilt-trip than those abused animal commercials on TV.  OK, nothing is worse than those, but you get the idea.  I usually feel really guilty when they call, so I sign up to bleed into a bag and adopt a greyhound or something.

The day I was supposed to donate, I did something incredibly stupid.  Well,  the stupidity happened the night before, and then just continued on to the next day.  I had driven the convertible to work the previous day and when I got home, the garage door had been locked so I parked and went inside, figuring I'd put the car away later.  Not so much.  Instead,  I forgot the car was out there, top down, and it rained all night.  Really hard.  Buckets.  Then the next morning I just left in the Honda and didn't even notice the other car sitting out there in the driveway making pathetic sloshing sounds.  To be fair, it was still pretty dark when I left, but when my wife called me at work and told me the entire thing was a giant puddle of water, I wasn't real happy with myself.   Also, it was supposed to rain all day again.  My wife can't drive a stick, and didn't have the keys, so all she could do before she left for work was throw a tarp over it.  As a result, I decided to head home at lunch time and at least mop up what I could and get the car inside before the coming storms made it worse.

This is really just a long way of saying that I showed up for the blood thing unannounced at around 10:30 instead of at my scheduled time of 12:45.  I figured if they had that much of a chub for my Type O, they'd take it when I offered it, and they did.  The only drawback was that I was really hungry, since I normally grab something to eat around 5:30 on my way to work and then eat lunch around 11:30 at the latest.

They were after me to do the "double red-cell" thing too, which I guess means they filter your blood through a machine that extracts the red blood cells and pumps the plasma back in, but I'm not down with that. Something about having my blood outside my body like it's standing on the corner looking for a job, and then having it pumped back in skeeves me out a little.  It's too much like science fiction.  At least if I'm just donating whole blood, I can lie there and pretend like it's 1453 and the barber-surgeon is just taking a little off the top.

I was antsy, so the whole prep thing was killing me.  First they made me read the booklet (which looked like it had been handled by a classroom of first-graders after their snack break) and then I had to get tested for anemia and answer a questionnaire about how many men I've screwed (none), how many needles I've shared (none) and whether or not I had been out of the country or in juvie for more than 72 hours.  I'm not sure what happens there at hour #70, but I'm glad I never have to find out.  Then they made me answer the same questions again, only this time on a computer screen. The whole thing was maddeningly repetitive and proceeded at a snail's pace, mostly because I showed up unannounced.  They were nice about it, even though I probably screwed up their schedule a little bit.  They say they take walk-ins but I'm not sure they actually like to.

They finally hooked me up, and luckily the 12-year-old girl who put the needle in my arm was pretty good at it, and I dropped a pint in a little over six minutes, which I think was a new record for me. Apparently even my blood was in a hurry to get the hell out of there.  As she was disconnecting me from the apparatus, she hit me in the eye with an errant hose or something and got really embarrassed.  I told her it was fine,  but it would be pretty unlucky of me to lose a perfectly good eye while giving blood.  She left me there for a bit, and then came back and asked me how I was feeling.  "Pretty good, except for the eye," I said.  I'm not sure she appreciated my humor.

Since I hadn't eaten, I was a little light-headed afterwards, so I sat down and drank a bottle of water and ate some ass-raisins.  I'm not sure where they got them from, but they were the worst, most juicy raisins I ever ate.  It's like they weren't quite done being grapes.  I only chose them because of their sugar content, but after eating half the bag I switched to a pretzel, which was non-juicy. Then I packed up my shit and headed for the car.  I got home just in time to pull the car in the garage before it started coming down hard.

After I got home I emptied my pockets and found the little info sheet they give you with all the "after donating" tips on it.  This paragraph made me laugh:

"Injury may result from dizziness or fainting after donation.  If you developed a cut as a result of a fall, you may want to request evaluation for stitches, especially if the injury is on your face.  Serious head injuries are uncommon after donation but may require immediate medical attention."

So basically they're saying, "Hey, thanks for your blood.  Oh, by the way, if you fall and cut your face wide open, you probably should get it sewed up."  That's really good information to know.

Other weird stuff I stumbled on this week: 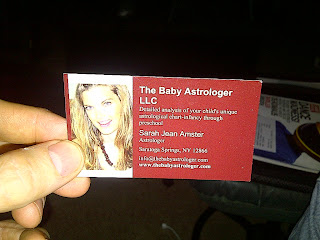 Why is this a real thing?  Are people that concerned about their child's "unique astrological chart" that this hot crazy lady can actually make a living off of them?  Whenever I see something like this I always think, "I wonder if they really believe that shit, or if they just saw an opportunity to rip off gullible people?" Then I got a little sad because I realized I would probably respect her more if she was knowingly ripping people off.  That's pretty cynical. But then again, I'm a Gemini and therefore I can see both sides of the issue.

The other thing that made me laugh today was this:

Fifth Third Bank.  The curious bank.  What crack-smoking ad agency came up with that tagline?  Not sure about you guys, but I really don't want my bank to be curious about me.


"Can I help you, Mr. Virgil?
"How do you know my name?  Who told you my name? I NEVER SAID MY NAME!"
"Don't be upset.  We're just curious about you.  So… are you wearing the boxer briefs today or going commando?"
"TOO CURIOUS! TOO CURIOUS!"


I don't want phone calls at home asking me how I'm feeling and if I need anything and how my garden is doing.  In fact, I want them to stay out of my life unless I specifically ask them to provide me with a banking service and I contact them to get it.  The last thing I want is some teller at Fifth Third asking me inane questions about my personal life when all I really want her to do is read the note and start stuffing the money in the sack.

p.s. - does anyone know why the EFF the spacing is all off on this blogger editor?  Looks fine in the editing window, but all sorts of weird spacing when it's published.
By Johnny Virgil at 9:07 PM